Tepekong is the largest of the islands in the sea opposite the village of Candidasa. We'd dive near it three times – once in January and twice in October 2016. Probably it is the richest place of corals in this area. It is a rock of volcanic lava and reef limestone on the surface, it is covered with green bushes. We are overcoming the line of the surf on the boat and going from our hotel Bali Santi Bungalows along the coast to the East. Candidasa (or Chandidasa which is closer to local pronunciation of this name) is a fishing village gradually turning into a resort because development of tourism. The main street of the village stretches for 2-3 kilometers along the sea and almost all hotels, shops and restaurants located near to it. The beaches near the hotels and villas are mostly stony, resting people swim in pools but snorklers and divers take boats to nearby small islands overgrown with coral reefs. We are divers, therefore, we almost had no time to survey the settlement and the surrounding area, except the evenings when we visited some vending restaurants. The rest of the time we admire the hotel Bali Santi Bungalows. It is inexpensive and quite nice - take a look: 300 meters to the North from the Blue lagoon along the coast. A small bay on the Eastern side of the cape, covering Padang Bay from the sea - East Bali sea gate. At the bottom of it the sand and volcanic rock wall. It was unclear inside, but we saw someone under water. At first, there were the ribbon eels there. They are rare, but but we found there black one and blue with bright yellow piping.. They pleased us :-) And the green black-spotted moray eel was there, quite large one. And nudibranches were there, however, quite common species. Also I fimed two cuttlefish, the first one was sleepy, but the second one was chipper and perky :-) Watch the movie:

The beach stretches 4 kilometers to the South of the airport. In day time you can have a lot of fun her – parasailing, jet skis, riding on "banana" or on strange jumping inflatable mattress towing by high-speed boat, snorkeling and even scuba diving in so-so coral reefs and so on.
At night the restaurants on the beach gather lovers of fresh seafood. They installs tables-chairs right on the sand just beyond the line of the surf, the spray of ocean waves – a condiment for food, sound of ocean waves - music accompaniment, and the huge setting sun instead of chandeliers. Something like that.. Evening on the beach of Jimbaran

Bali. On the edge of the ocean: Uluwatu temple complex

The Bukit Peninsula is situated at the South-East of Bali and is washed by the open ocean. There are a district of South Kuta and Pecatu village on it, Uluwatu Temple is situated next to them. Parking at the entrance to the temple complex

Bali. The legend of Bali - beaches of Kuta

There are chain of three resort towns - Kuta, Legian adn Seminyak- in the South-Eastern part of Bali island, along the beach, which is washed by the huge waves of the Indian ocean. They practically merge with the island's capital Denpasar city, it is difficult to determine the boundaries. In addition, Kuta beach is located near the international airport and the beaches are fantastic – white soft sand and huge waves, and in 1936 the couple of Americans, Robert and Louise Kwak, had built the first hotel here. Then others did the same, and poor fishing village gradually turned into a huge resort agglomerate. Popularity of this place was increased due to the surfers and hippies from Australia and Europe, and Kuta became the object of pilgrimage since the late 60-ies of XX-th century. In those years they spoke of three K: Kathmandu in Nepal, the Khoasanstreet in Bangkok (for a different version of Kabul in Afghanistan) and Kuta in Bali. Hippies fueled with coke in the first two points and then they had completed their journey in Bali in the lean dry season.
Now Kuta has countless shopping stalls, shops, small family hotels and the coastal line is built out with adjacent one to another hotels, restaurants, night clubs. The mountain (Seraya volcano) is located in the Eastern part of the Bali island, the peak has height of 1058 meters above sea level. The place, of course, is sacred, there are 7 levels of shrimes on the Northern slope up to the top of the mountain and they all are joined by steep stairs. This temple complex is one of the oldest on the island (2000 years), its construction was started in pre-Hindu times. It stretched out as 2 km on the hillside, stairs have a total of 1700 steps. The ascent route offers to you wonderful views of the jungle on the mountain slopes and the blue sea and the cone of the volcano Agung - the highest point on Bali. The North coast of Bali, the place is near of Amed village, a small bay with a dive hotel on the beach. The bay is private property: if you come from the sea by diving boat, you will be given a ticket, which must be paid later, otherwise it will be a violation of the local laws. You have to pay because the place is popular, there are rare scorpionfish (Rhinopias aphanes), frog-fish and all sorts of other unusual sea creatures. We were unlucky about such scorpionfish, but we've seen someone. The first place, of course, was for scorpionfish – there is their Kingdom here.. THis place was ten minutes on a motor boat to the East from the Amed Beach Resort hotel. We fell into the water from a boat. Northeast of Bali, Amed village. We stayed here in January 2016, a few days in a small dive hotel, cosy and welcoming. Unlike other places in Bali, it was possible to swim in the sea not only in pool, because there is no crazy waves as on the southern beaches of the island and there was pebble ground from beach to the sea, not rough corals as in the East. The water was warm and clean, it was quiet and peaceful place, no crowds of tourists and the surroundings were beautiful, especially early in the morning – splendor! :-) The North-Eastern end of Bali, the town of Banyuning, a small bay near the fisher's village of Lipah. There is Badung Strait near, it separates Bali island from the group of islands lying to the East, the largest of which is the island of Nusa Penida. Diving here, you have to be careful in order not to be captured by powerful currents which can carry you either to the North of Bali sea, or to the South to the Indian ocean right to Australia and even Antarctica – as lucky you are:-) 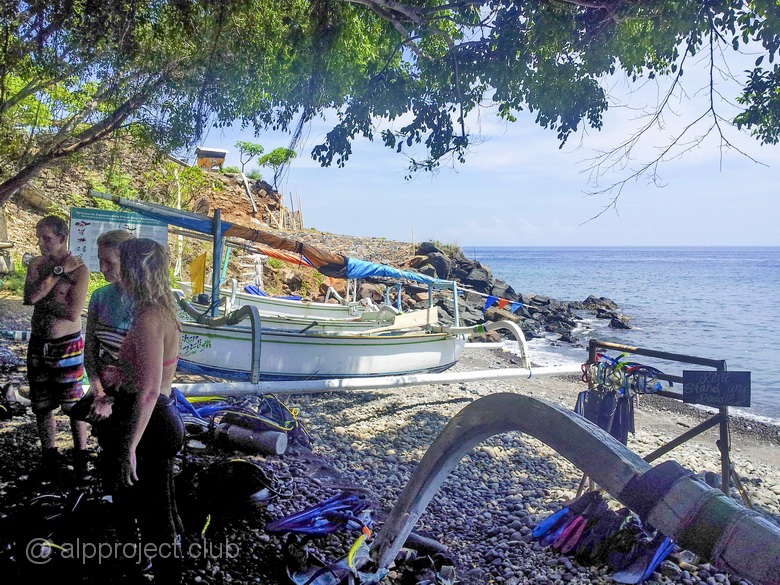 The North-Western end of the island. There is a sunken boat here at a depth of 30-40 metres. Its story is vague, no one really knows about it and there are only fragments at the bottom. One lonely shy whitetip shark lives here who did not allow us to swim closer, so we failed to make a portrait, but you can see it in the movie. We made some photos and movies at depth and moved slowly upward along the coral wall, moving to the west by current. We met something by the way, look at the movie..

The South-Eastern wall of Menjangan reef. The water was really hot, some cold jets made us happy. Tangible, sometimes even very tangible, currents constantly change their direction, and we drifted there and back. 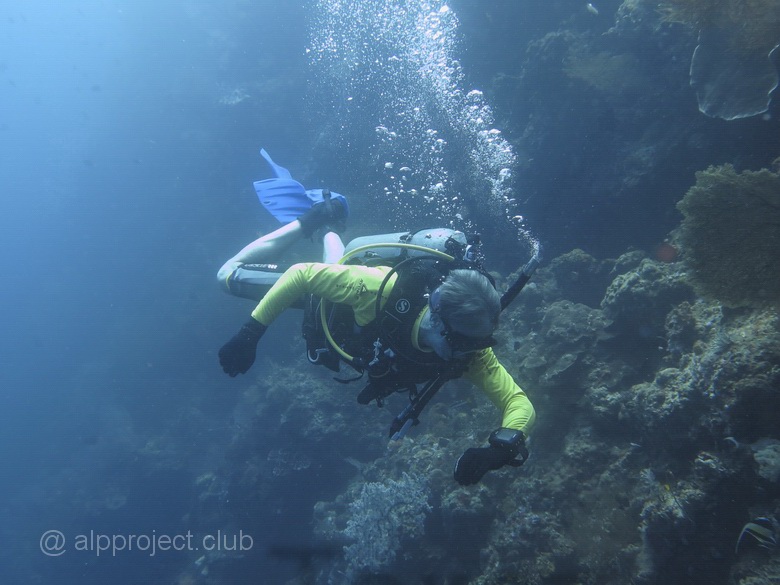