Andamans. Who is looking will always find

East entrance to the strait between Havlock and Neill Islands. This place was explored by our guide Dharmesh, he considers that it is his personal finding. 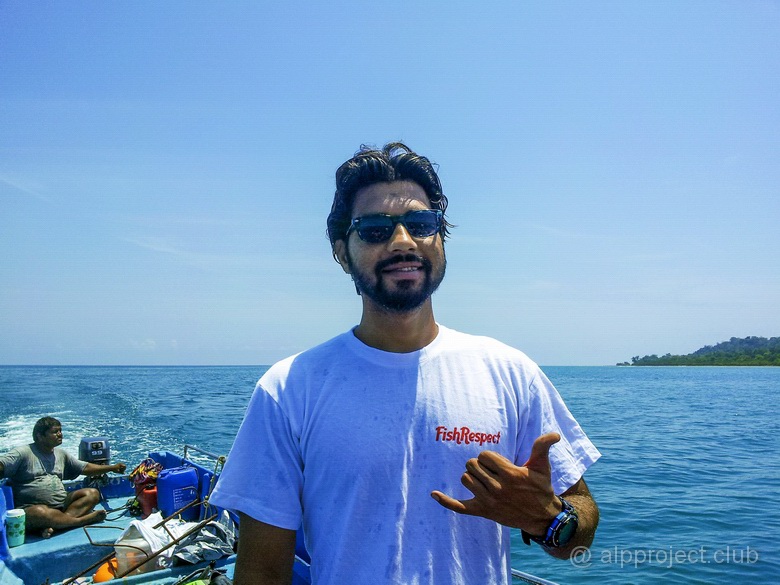 There are three large coral growth on a large underwater pinnacle with the surface of the folded subhorizontal laminated sandstone. 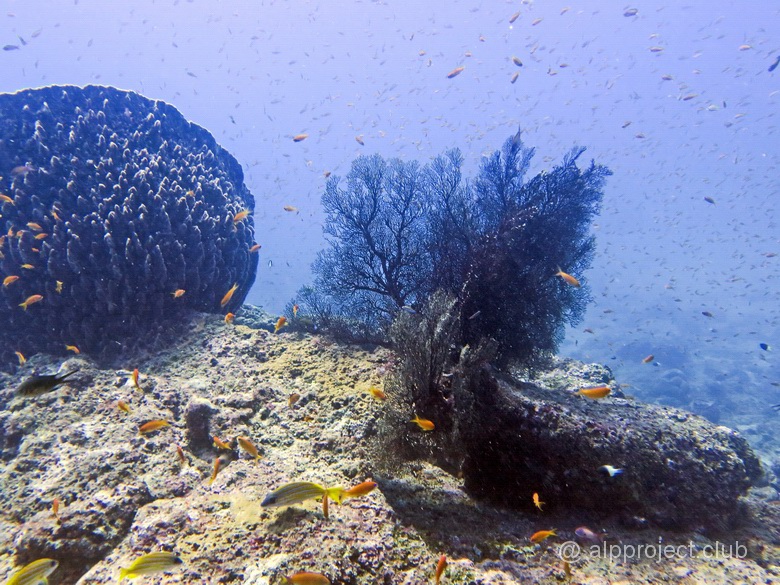 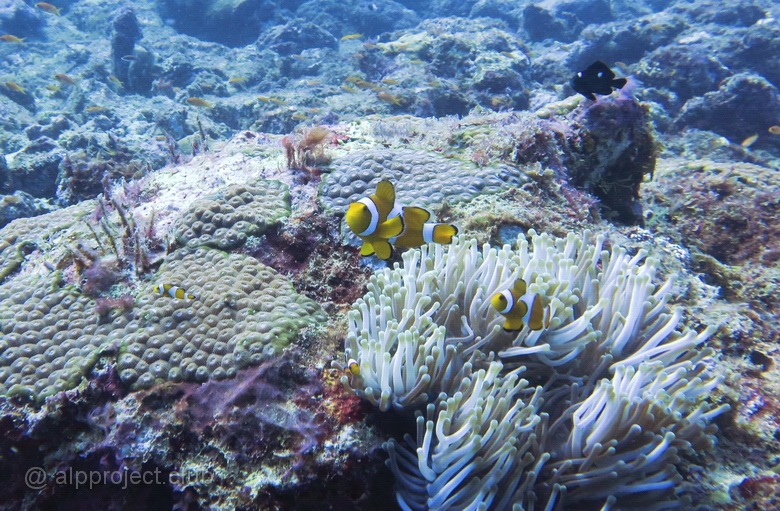 There is big depth here, we will meet a dugong hardly. But how many fish are around us!

The oceans cover more than 70% of the earth's surface, but according to the newest science research, there are only 1% of the planet's biomass as living creatures in it. 86% of life is concentrated on the earth's surface and 13% are bacteria that live in soils and rocks deep underground. At the same time 82% of the total biomass - plants, all other creatures – insects, fish, animals – is only 5%! And humans, all 7.6 billion, who have already killed 83% of wild mammals, half of plants and 15% of fish, humans are pathetic one-hundredth percent of all life! The numbers are appalling, and the process is being accelerated year after year. That is why so pleasant to find places where fish populations are still significant. Schools of snappers and sweetlips, groupers, triggerfish, surgeon fish and large angel fish with anemones clown fish, beautiful corals and sponges – this is an incomplete list of those who we managed to see here. The dive site is still nameless, we propose to call it in honor of the discoverer - "Dharmesh Point"(11°51'23.50"N 93° 3'19.30"E). Crew of our boat and views of the strait: 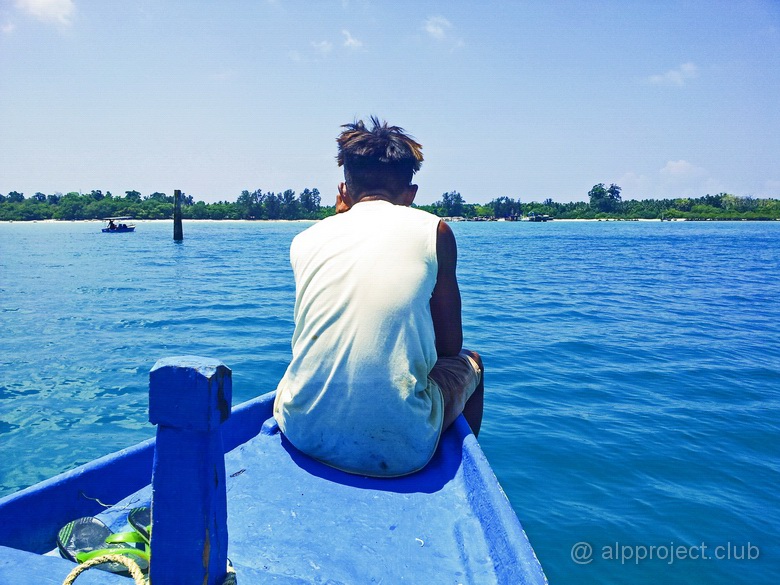 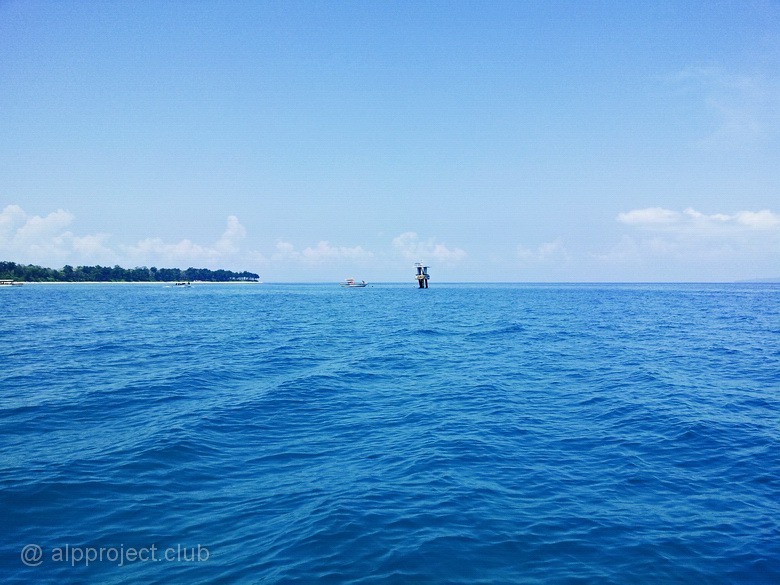 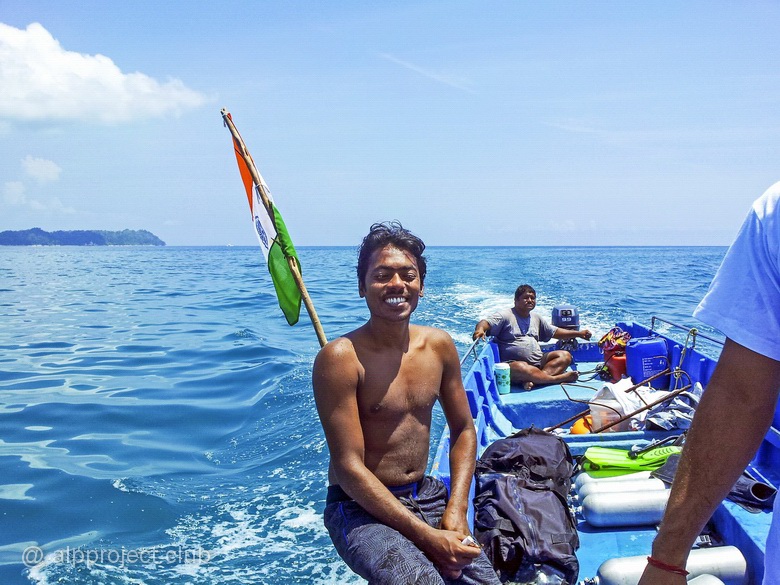 Now talk about the main thing - the search for a sea cow. More precisely, the sea cows themselves are an extinct species, they appeared in the seas about 11 million years ago, reached 10 meters in length and weighed up to 10 tons. About 12 thousand years ago, the giants were completely consumed by man, they were replaced by descendants of smaller length up to 4 m and weighing up to 600 kg. The Malays called them "duyung", which means "mermaid", then according to harmony they were named "dugong". So they live in the waters of the Neill Island. They belong to sirenians, as well as their close relatives - manatees almost completely consumed by man. There are two differences between these two types of animals: dugongs have a downward muzzle and a tail in the shape of a fork, while manatees have a straight muzzle and a rounded tail. Both have thick, hard skin, eyes without eyelids, small external ear holes and a characteristic strong muscular upper lip. Scientists believe that these marine mammals have one common ancestor with elephants, as indicated by some similarity of the teeth and in the position of the thoracic glands.

Most commonly a dugong could be founded near the North coast of Neill Island at the bottom of the strait in front of the hotel we lived in, the dive site is called "Aquarium" (11°50'57.20"N 93° 1'28.00"E). The water there is usually quite muddy, the depth is small, separate tables of corals growon the sandy bottom, fishes wind around. We have been there three times, the first two dives have not brought us results. Of course there were coral fish, Bluetriped rockfish, sea cucumbers, lionfish, nudibranchs and Moray eels. And at start of the second dive we dropped right on the heads of big green humphead parrotfish. 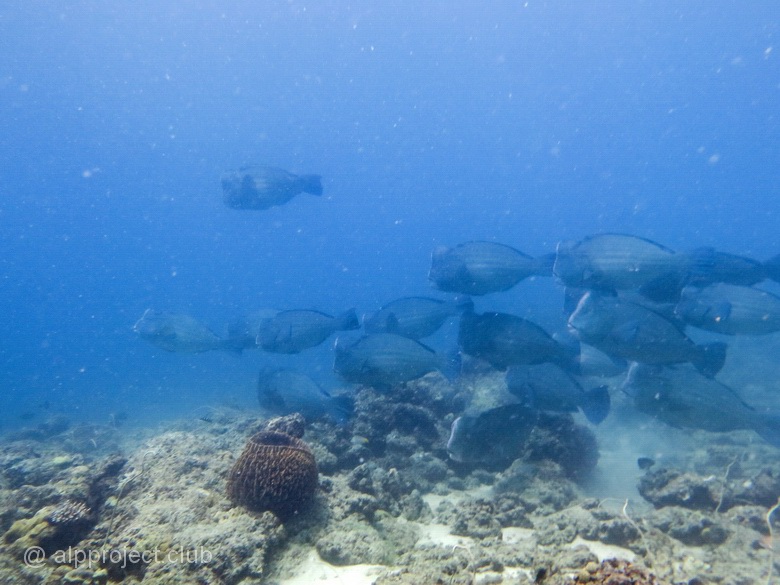 The place is not empty, but we needed the dugongs. 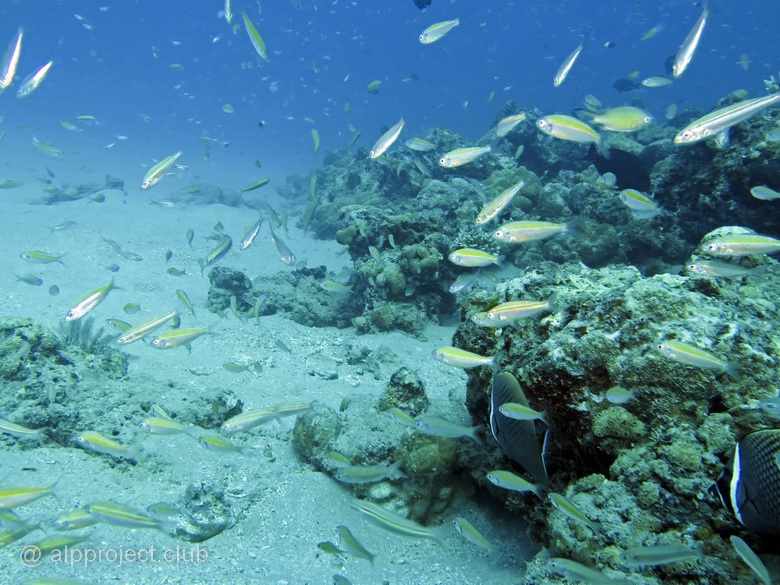 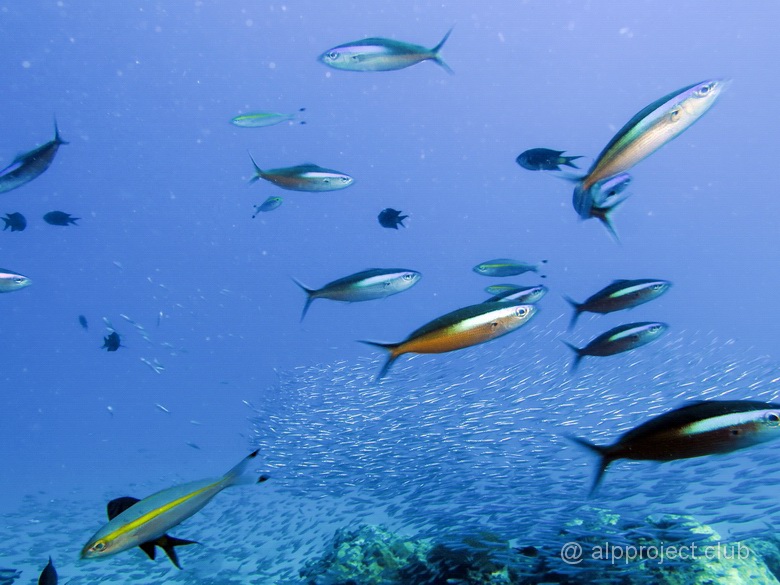 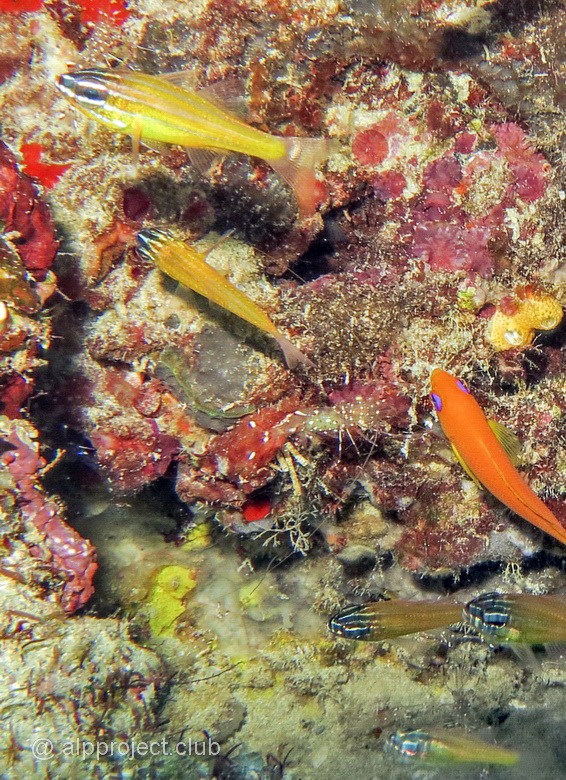 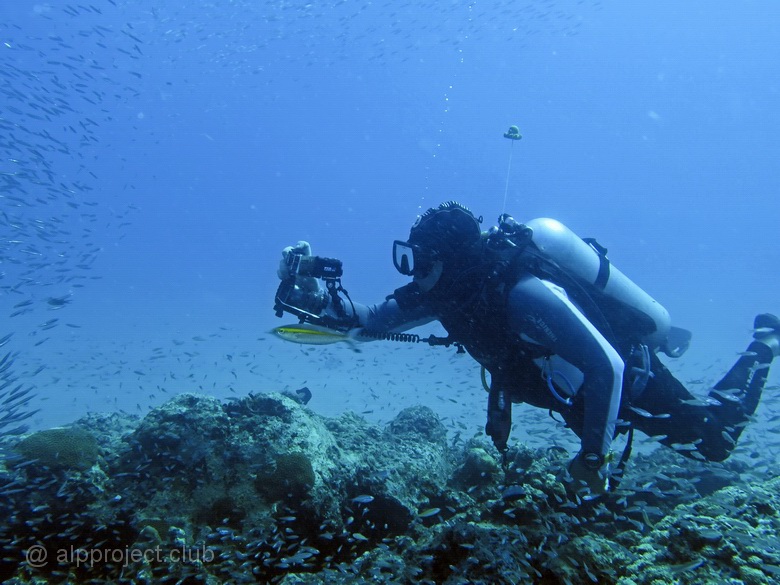 On our last day on the Neill we begged our guides to look for dugong seriously. Our boat circled for a long time in shallow water a kilometer from the shore, the crew carefully peered into the water. And finally: "Stop, stop, and what is it"?!? Repeated circle, and experienced captain confirms: "Dugong"! Hurry up we wear the cylinders and fall into the water, I hurriedly drop down the camera, looking for it, time is running out... Here it is, it glitters by a glass lantern! Get your...

Luckily, dugongs are unhurried animals. They are fed on sandbanks only certain types of aquatic plants and algae. When feeding they spend 98% of the time under water, where they "graze" for 1-3, maximum 10-15 minutes, then rise to the surface for inhalation. On the bottom they often "walk" on the front fins. They torn off the grass by the help of a muscular upper lip, in the day they eat up to 40 kg of it. Before eating the plant, dugong usually rinses it in water, shaking his head from side to side.

We came across a fairly large animal about three meters long. Males have tusks, our one had not, therefore, I think we met the female. She didn't let us get close, went swimming, but we had shoot her a little. The movement of the dugong – the very grace, of course, they are the prototype of fabulous mermaids. The face, however, they have not-very-nice – flat, with deep-set small eyes, but it visible only if you look closely, but from afar – they handsome! 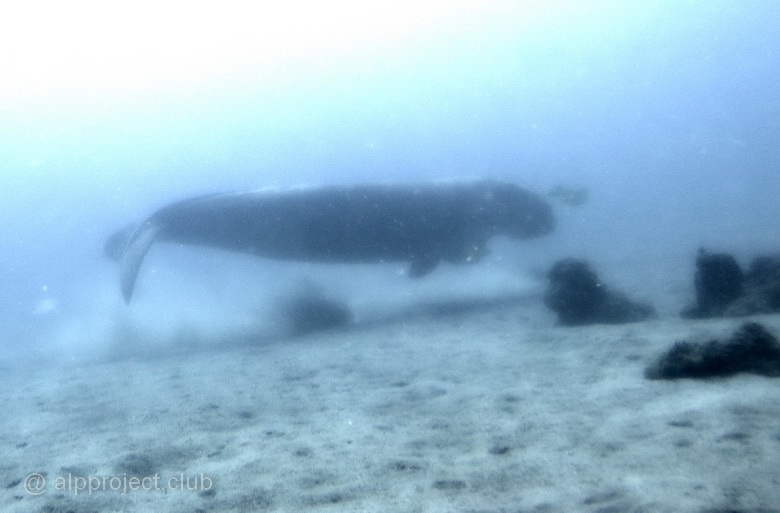 In general, we are incredibly lucky, often divers leave the Neill Island without such meeting and we were almost ready for such a final...

Watch our movie, this is our last story about the underwater world in this book, tomorrow a long road to home begins…