From the book "Straight to the South", part 2 "Shark archipelago", episode 6.

Maldives, a tiny state washed by the equatorial waters of the Indian ocean. It was the idea of diving next to the sharks on the southern atolls with names from Arabic fairy tales - Huvadhoo, Foie Mulan, Addu - what attracted us to make this trip, everything else was attached during its planning, which looked something like: how to get there? It was much cheaper and easier for us to go through Sri Lanka, so why not stop there for three days, to look what kind of country is Sri Lanka? Safari in the Maldives lasts only 7 days, so why not to extend the pleasure? Since we're out of the home, we need to see something else! And how much does it cost, for example, to fly from Maldives to the Andaman and Nicobar Islands? So it's very inexpensive and the places there are nature reserves! So go ahead!

Today is not an easy day for us. We woke up at 2:00 am (!) at their hotel in Sigiriya, we said goodbye to the hosts, who stood up for this in the middle of the night, and their son and friend took us to Colombo airport.

We didn't remember road to the airport because we slept all the way on the rear seat. We checked in the airport, register the luggage and passed the border, one problem was - not to fall asleep until we didn't reach the plane. Flying Airbus 330 (not new, but not too old), the flight tooks 1:15, we barely had time to start sleeping and -here you are - landing at the airport in the capital of Maldives – Male city.

We had to wait a little for our luggage, but not very long, then we passed the border very fast and here we are in the Maldives. Time around 9:00 in the morning, stifling.. Speaking of time: I had to transfer my hours half an hour ago from Indian, and as result it is an hour earlier than in Bishkek. An hour and a half after that the plane from Moscow arrived with our friends – Ivan, Sasha and Volodya, the same flight arrived yet unknown for us Yura - guy from Kazakhstan. Another our comrade, Valentin from Kiev, traveled via Dubai and arrived a little later. Thus, we'd be seven Russian-speaking onboard from 23 all divers.

From Male we fly to Koodoo is in the South Maldives, a local flight at 17:40 and the whole day we spent at the airport in the sweltering heat, trying to sit closer to the fan. It was possible, of course, to go to male on the ferry for $1, but there is nothing to do there: there is not much interest there – the country is Muslim and walk around in such heat – not a pleasure and we also are tired a lot. We ate spicy 'tom yum' soup in a Thai restaurant ($12), and then talking about everything - we didn't see each other a long time..

Our flight was delayed for 40 minutes, but, they say, it is common practice in the Maldives, the local planes jumping from one atoll to another from early morning until late at night, only the crews changed, so there are delays happen due to late arrival in the evening - somewhere it delayed a little bit with the refueling or the weather was not good, for example..

Finally we got in our twin-engine plane with about twenty passenger seats (like in a van!), we listened to onboard broadcast recording instruction about safety, ended with a prayer, and took off. 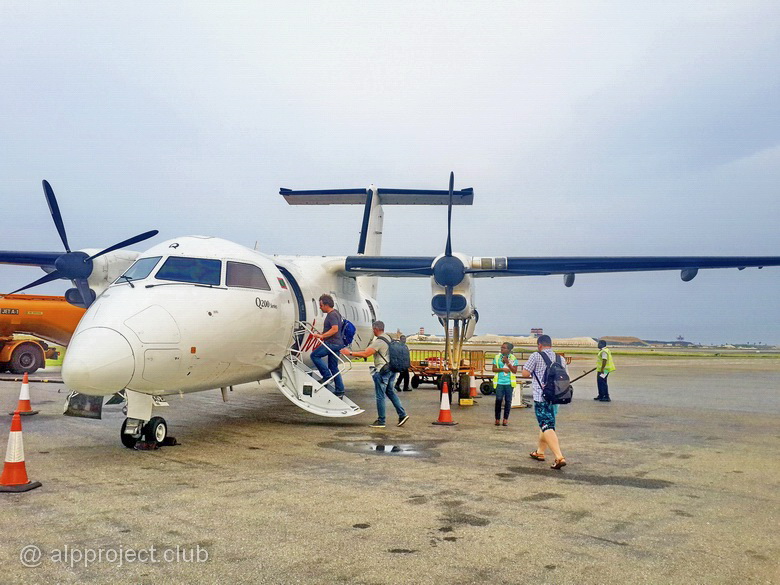 It was darkness outside, we were given water to drink, we flew for about an hour, then an intermediate landing on some of the atolls, again takeoff and water, another 20 minutes of flight, and here we are at the Koodoo airport on the Huvadhoo atoll.. We got it!

But today's hardships for us did not end there: we were quickly loaded onto an auxiliary diver's boat, which we will use to dive from, it is called "Doni", and while she moved about 20 minutes to our main yacht, they forced us topull out the equipment and equip our cylinders because tomorrow the first dive will starts at 7am.. Oh, we can only dream about a rest!

Dinner and mandatory training on the ship were crumpled, all brutally wanted to sleep. They shown our cabins for us, we hastily stuffed in lockers our odds and we fell asleep..

We stoped to hope on luxury relaxation on the fabulous Maldives. According to the beginning happen, our program will be slightly different from our hopes.. :)